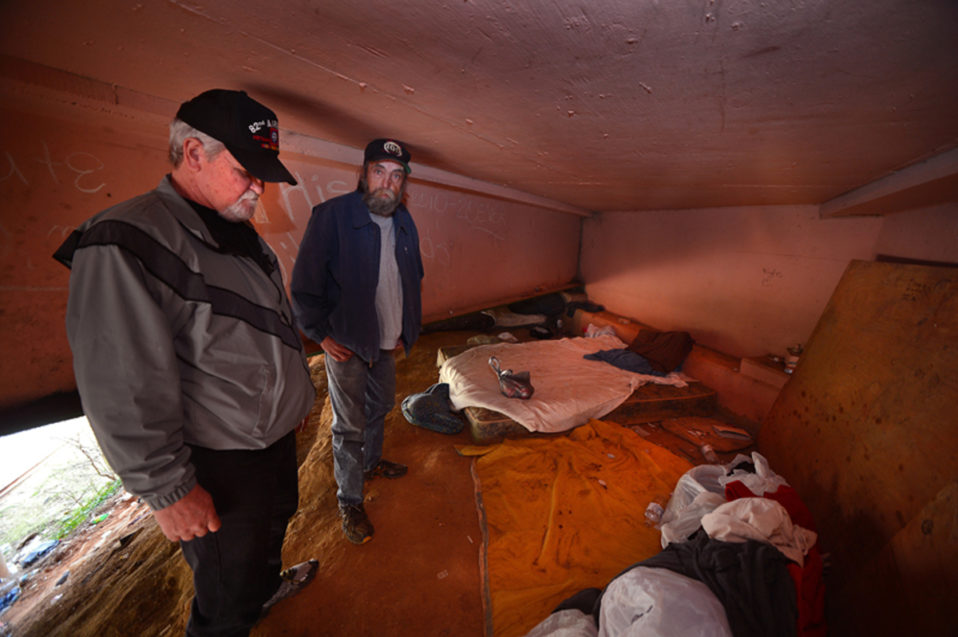 Dr. Craig Burnette is known throughout the community and the nation as a leading expert in the area of homelessness, devoting his life and energy to assisting homeless veterans in need.   On Tuesday, March 26, 2013, Burnette received The Mary L. Thomas Award for Civic Leadership and Community Change at The Spartanburg County Foundation’s Annual Meeting.

The Mary L. Thomas Award is named after Mary Thomas, the chief operating officer of The Spartanburg County Foundation.  This award is a legacy from Thomas’s 2006 recognition as the recipient of the Council on Foundation’s Robert W. Scrivner Award for Creative Grantmaking. Upon receiving the Scrivner award and $10,000 cash prize, Thomas used these funds as seed money to open The Mary L. Thomas Award for Civic Leadership and Community Change Fund and started a similar recognition program in Spartanburg. Through the support of numerous individuals and the Spartanburg community, Thomas’s initial gift of $10,000 grew to exceed $100,000, which has permanently endowed the award. The award annually honors individuals who, like Mary, are community leaders, innovators, and contributors to positive community change.

This year’s recipient, Dr. Burnette, served in the U.S. Army as an infantry platoon leader, company commander, and military adviser.  In addition to connecting with veterans through his military experience, Burnette has served veterans in many capacities, including spending 28 years with the U.S. Department of Veterans Affairs, overseeing the planning, development and implementation of Project CHALENG, a nationwide program that annually assesses the needs of homeless veterans in 170 cities and towns across the United States and then develops local action plans to meet those needs.

“Craig Burnette is the epitome of the advocate for veterans,” said Michal Chessner, executive director of the Upstate Homeless Coalition.  “He has lived with them in combat and has lived with them as they have suffered injury, psychological trauma and re-entry issues.  He knows their plight because he is one of them.”

Last year, Dr. Burnette led efforts to coordinate the Upstate Stand Down, an event that is focused specifically on the rehabilitation and recovery of homeless veterans by providing multiple services in one location. He organized a group of over 100 community members to ensure the project was a success.  As a result, a total of 215 individuals participated in this event.

“Dr. Burnette is truly a servant leader,” said Phillip Makowski, board member with Operation Restoration CDC.  “His energy, drive, ‘we can do it’ attitude, coupled with his outstanding competencies continue to result in remarkable outcomes to battle the issue of homelessness in Spartanburg and the upstate.”

Dr. Burnette also works with several local nonprofits, provides one-on-one assistance to homeless veterans, speaks to various groups about this important issue, and serves as a member of the U.S. Department of Veterans Affairs Secretary’s Advisory Committee on Homeless Veterans in Washington, D.C.

“There is not a day that goes by that he is not fervently working in our community, on multiple levels, to impact change, whether through individual requests for help, his service on numerous committees, his continued public awareness efforts and his initiation of projects and services regarding homelessness,” said Makowski.

Burnette was presented the award and a $5,000 cash grant, which he has chosen to split between Operation Restoration for Welcome Home, a transitional home for homeless veterans, and Habitat for Humanity of Spartanburg.

Learn more about the history of the Mary L. Thomas Award for Civic Leadership & Community Change and review past recipients.

Your ticket for the: Dr. Craig Burnette Receives The Mary L. Thomas Award for Civic Leadership and Community Change