The Spartanburg County Foundation held a Donor Connect Education Session, “Rising Up: Spartanburg’s Northside One Year Later,” on Thursday, August 27, 2013. The Foundation’s donor advised and supporting organization fundholders, as well as members of Women Giving for Spartanburg (WGFS) attended the session and breakfast. 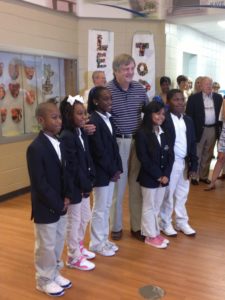 Arthur Cleveland and Student Ambassadors at the Cleveland Academy of Leadership

Bill Barnet, Northside Development Corporation board chair, and Curt McPhail, project coordinator, served as the session’s guest speakers and tour guides.  Attendees learned about the Purpose Built Communities model and the evolution and idea behind the Northside Initiative, as well as what the Initiative means for Spartanburg and to the community as a whole.

Mr. McPhail and Mr. Barnet guided Foundation fundholders and WGFS members on an awe-inspiring tour of the Northside, including visits to the Edward Via College of Osteopathic Medicine (VCOM), the future site of the Healthy Food Hub, and several properties slated for future development.  The Tour made its final stop at the Cleveland Academy of Leadership where attendees were greeted by the Academy’s Principal, Fred Logan, and several Student Ambassadors.  The Student Ambassadors made a cheerful presentation and then guided attendees on a tour of the school, which allowed the opportunity to visit classrooms learn more about the school.

The session was enjoyed by all and attendees left feeling inspired and energized.  The Foundation looks forward to planning future tours to share the progress of the Northside Initiative, as well as tours of other parts of the community.

Your ticket for the: “Rising Up: Spartanburg’s Northside One Year Later”