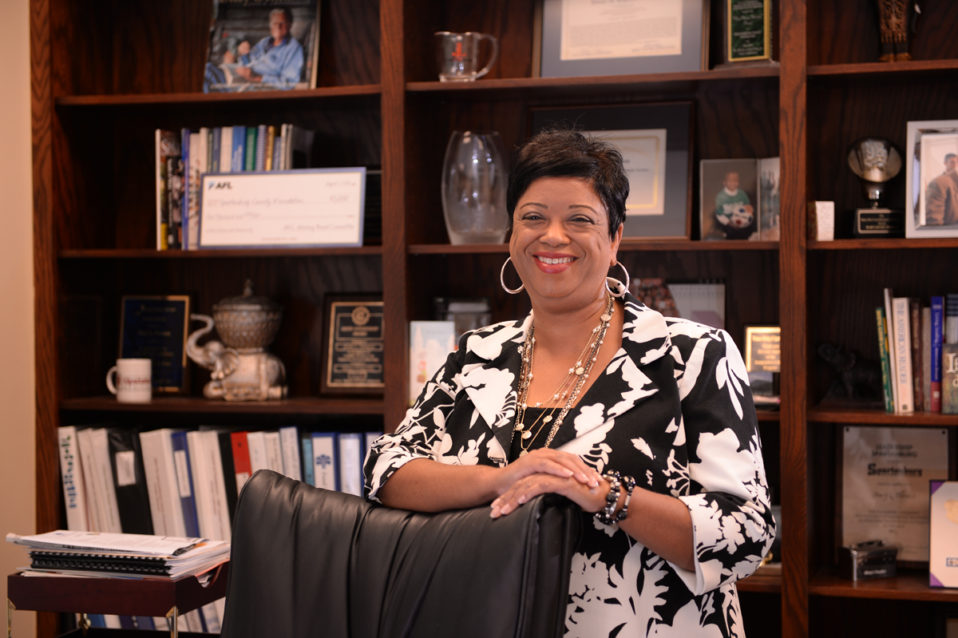 Mary L. Thomas, chief operating officer at The Spartanburg County Foundation, is once again showing herself to be a leader who embodies excellence.  Thomas was recently named as one of three finalists for The Council on Foundations’ Distinguished Service Award, the highest national honor one can receive in regard to philanthropic work.  The Award celebrates a visionary leader who inspires and embodies the qualities that define excellence in philanthropy, specifically focusing on commitment, courage, entrepreneurship, and impact. In May of this year, colleagues from The Spartanburg County Foundation nominated Thomas for the Award.  They soon learned that she had been chosen as one of seven finalists, selected from a pool of leaders representing community foundations, family foundations, and private foundations from across the country.  Voting was then opened to the Council on Foundations member organizations to select their top choice.  With over 1,500 votes cast, Thomas was chosen as one of three finalists. “We at The Spartanburg County Foundation are so proud of Mary’s accomplishments, and we celebrate this important milestone for Mary in her philanthropic work,” said Troy Hanna, president and CEO of The Spartanburg County Foundation.  “Mary has always set a standard of excellence in everything that she does, and we are delighted to see her passion and commitment being honored on the national stage.” Ms. Thomas has over twenty-five years of experience in the nonprofit sector, including 16 years serving The Spartanburg County Foundation.  In her current role as Chief Operating Officer, she leads the mission, vision and strategies of the Foundation while translating the Foundation’s goals into the overall program of work.  Prior to joining the Foundation, Ms. Thomas was the Executive Director of the Bethlehem Community Center, an inner city ministry that serves women and children in Spartanburg.  A graduate of Winthrop University, she has been an active leader in the Spartanburg Community, holding extensive leadership roles with a host of organizations throughout the region and beyond.  She currently serves on the boards of Spartanburg Regional Healthcare System (SRHS), The Southeastern Council on Foundations, Northside Development Group, and BMW Community Advisory Panel.  Ms. Thomas’ many honors include being named the first African American winner of the 2006 Council on Foundations’ Robert W. Scrivner Award for Creative Grantmaking, through which she used the cash prize to establish The Mary L. Thomas Award for Civic and Community Leadership. Thomas is noted nationally for her work building partnerships across the public, private and nonprofit sectors to bring about community improvement. “Mary is a teacher.  She is a collaborator.  She happily shares her knowledge and expertise, and others share with her as a result.  No one questions her integrity, her work ethic, or her dedication to mission, to community, and to her team,” said Denise Spencer, president and CEO of the Community Foundation of the Low-country.  “She is a mentor not only to the staff who report to her, but to many others in the philanthropic landscape.” When reflecting on her achievement and those who supported her nomination, Thomas, said, “I am grateful to have been in the company of such incredible leaders in our field.   To be named as one of the top three in the country is quite a feat.” On Thursday, September 4, 2014, the Council on Foundations announced the recipient of the Award to be Darcy Oman, president and CEO of The Community Foundation Serving Richmond and Central Virginia. “Though Mary was not selected, Spartanburg County and The Spartanburg County Foundation have much to celebrate,” said Hanna.  “We are indeed fortunate to have such a dedicated and innovative leader as Mary Thomas in our community and as part of the Foundation team.” The Council on Foundations is formed of approximately 1,600 independent, operating, community, public and company-sponsored foundations, and corporate giving programs in the United States and abroad.  The Council’s mission is to provide the opportunity, leadership, and tools needed by philanthropic organizations to expand, enhance, and sustain their ability to advance the common good.