Victor Durrah Jr. has dedicated himself to ensuring there are positive role models for struggling youths. 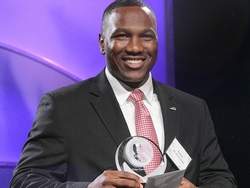 Tuesday night, Spartanburg County Foundation honored Durrah with the Mary L. Thomas Award for Civic Leadership and Community Change. The award was presented at the Spartanburg Marriott. Durrah, senior executive with the Daniel Morgan District of Boy Scouts of America and executive director of Brothers Restoring Urban Hope (BRUH), was chosen by the selection committee from numerous nominees for his efforts to connect disadvantaged children and teens to positive role models.

Raised in a single-parent home in Cowpens, Durrah, 31, said he struggled with many of the challenges that confront the disadvantaged youth he now serves. He said some of those challenges include a bleak outlook of the future and a feeling of being trapped. Durrah credits a pastor, basketball coach, and fraternity brother for helping him.

“That kid that we’re talking about, that was me,” Durrah said. “I see myself.”

Durrah and a college classmate, Clevon Boyd, started BRUH in 2007 during their senior year at the University of South Carolina Upstate. There are about 20 to 30 mentors in the BRUH program, and every school year they select a different group of children in Spartanburg, Greenville or Cherokee county based on referrals from the community. One year, it was elementary students at Cleveland Academy of Leadership, Durrah said. Maybe next year it will be a group from the Department of Juvenile Justice, he said.

“We work in all segments of the community,” he said.

Once each month, the mentors meet with students for various activities. They do group readings, visit colleges, and go to sporting events in an attempt to get students out of their environment to create a positive, memorable experience. Along the way, students are taught manners.

Fred Logan, principal of Cleveland Academy, said he is grateful any time people take an interest in his students. He also said he was appreciative of the attention the BRUH mentors gave individual students.

“We have many students who need an additional positive role model in their lives, ” Logan said. “People like Victor Durrah and his group can make all the difference in the world to a child.”

“A lot of times, someone has made it because someone told them they could,” Durrah said.

The Mary L. Thomas Award for Civic Leadership and Community Change was established in 2007 to recognize community leaders, innovators and contributors to community change by addressing critical issues in the Spartanburg community. The previous year, Mary Thomas, chief operating officer of the county foundation, received a $10,000 grant along with a national award for creative grantmaking. She used her winnings to start a fund for the Spartanburg County Foundation’s annual honor.

“I want to perpetuate a vision of leadership. There’s so many people out there doing great things and don’t ask for recognition,” Thomas said. “I just want it to be an encourager. … This is my legacy to the community.”

By Felicia Kitzmiller for Spartanburg Herald-Journal

Your ticket for the: Spartanburg Mentor Receives Leadership Award