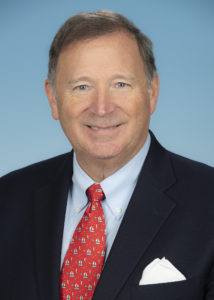 The Spartanburg County Foundation is pleased to announce the election of Robert P. “Ricky” Richardson to the Board of Trustees for a term of seven years.

Ricky Richardson is a First Vice President and a Financial Advisor with The Richardson Group at Morgan Stanley in Spartanburg. Working with Morgan Stanley for over 38 years, Mr. Richardson specializes in individual and corporate investment strategies, asset allocation, and advising plan sponsors on their fiduciary responsibilities. He is a graduate of Hampden Sydney College in Virginia with a Bachelor of Arts degree in economics. Born and raised in Spartanburg, Mr. Richardson is also a graduate of Spartanburg Day School.

Mr. Richardson brings expertise in financial services and strategic planning to The Spartanburg County Foundation Board of Trustees. An active member of the community, Mr. Richardson is a board member of the United Way of the Piedmont and Chairman of the City of Spartanburg Design Review Board. Previously, he was President of the Board for Spartanburg Area Conservancy (SPACE), as well as Chairman of the City Planning Commission Advisory Board. In addition to leading a $20 million capital campaign for Spartanburg Day School, Richardson led the effort for an $11 million bond referendum to construct what is now the Headquarters Library on Church Street in Spartanburg.

Devoted to Spartanburg and deeply invested in the community, Ricky and his wife, Betsy, have been active in making Spartanburg a better place for future generations. He and Betsy have two children, Rob and Caroline, and two grandchildren. When he is away from the office, Ricky enjoys spending time with his family, sailing, woodworking, and traveling.

Your ticket for the: The Spartanburg County Foundation Welcomes Ricky Richardson As New Trustee