Below is an excerpt from the Mobile Meals of Spartanburg September 2020 Newsletter.

Leaving a legacy in Spartanburg happens during a lifetime and after its end. Planned giving helps maximize the benefits of philanthropy while completing end of life financial and estate planning.  Your planned gift to The Spartanburg County Foundation will have meaning and impact for generations to come. Recognizing that different people have unique financial and estate planning needs, The Spartanburg County Foundation works to develop the best plan to achieve your philanthropic goals. 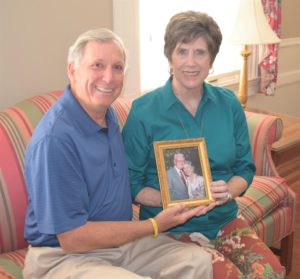 Sitting with Roy and Jibba Powell in the reception area for Mobile Meals in the 90’s, they shared a very memorable story with me.  Even though very ill with lung cancer, Roy insisted on continuing to deliver “their” route each week.  This very day he had received a radiation treatment and the two of them (always) came to Mobile Meals to “sit awhile until I get my legs back under me,” Roy would say.  After 30 minutes or so they would faithfully deliver their route with food and love to Camp Croft Courts.

Camp Croft Courts was very special to them.  Back in the 40’s, Roy spent several years on active duty in World War II in the Aleutian Islands, which ended with an Allied victory over the occupying Japanese Army, followed by duty in Alaska and finally in Washington D.C.

Camp Croft Courts was a new project built for returning Spartanburg military and their families.

The Powells moved into those apartments in late 1945 and lived there for 5 years.  Many of you may know Perrin Powell (former principal of McCracken Junior High), one of the Powells’ 3 children, was born there.

In 1950 they moved to Boyd Street.  They faithfully delivered and contributed to Mobile Meals from 1977 (the year Mobile Meals began) until within weeks of Roy’s death in late 1997.

Roy and Jibba generously set up the Roy S. and Elizabeth P. Powell Mobile Meals Trust Fund with the Spartanburg County Foundation which annually provides a very generous gift to feed those in need, many of which are in Camp Croft Courts.

Their cycle of loving others and taking care of those in need will continue forever from their trust!

I pray that their generosity will inspire others.  We always receive the blessing by blessing others.

Your ticket for the: Memories of Camp Croft Courts and Roy and Jibba Powell – Mobile Meals of Spartanburg