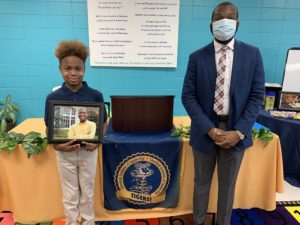 When Tramaine Brown returned to the Cleveland Academy of Leadership over 10 years ago as a tutor, he brought many dreams with him. A Wofford College student at the time, Brown established the Wofford Math Academy at Cleveland Elementary School. His dream was to help create a spark in the young minds at Cleveland, the very school he had attended as a youngster. Brown had learned the benefit of mentoring as a participant in the Citizen Scholars program, which helped him and other at-risk students prepare for college. Not only did he go on to college, but he also went on to work for President Obama and Apple, and this fall he began a graduate program in teacher education at Harvard University.

As a Citizen Scholar, Brown was mentored by former District 7 school board member Laura Stille and her husband, Brande. Mrs. Stille reflects that as Brown built the capacity for his own success, he became both a resource and role model for young people at Cleveland. “We’re incredibly proud of how Tramaine constantly pushed himself to higher academic achievement, while also reaching out to his peers at Wofford College, and to the community he served,” she said. The math tutoring program he established at Cleveland continues to benefit students today. 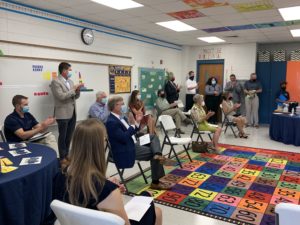 Earlier this year, the connection shared by Brown and his mentors came full circle as the Stilles, Alice Eberhardt, and members of First Presbyterian Church gave the funds to create a new math lab at Cleveland Academy. Principal Marquice Clark says this new math intervention model will lead his students to a stronger conceptual understanding of mathematics and to think like a mathematician.

This month, the lab was formally dedicated in Brown’s honor. During the dedication, Cleveland Tiger Leader Bradin Bryant (pictured above) read a poem Brown wrote to inspire every Cleveland Academy student. Titled “A message from a student from not so long ago,” the poem will continue to be displayed in the lab to inspire hopeful students who look toward bright futures of their own.