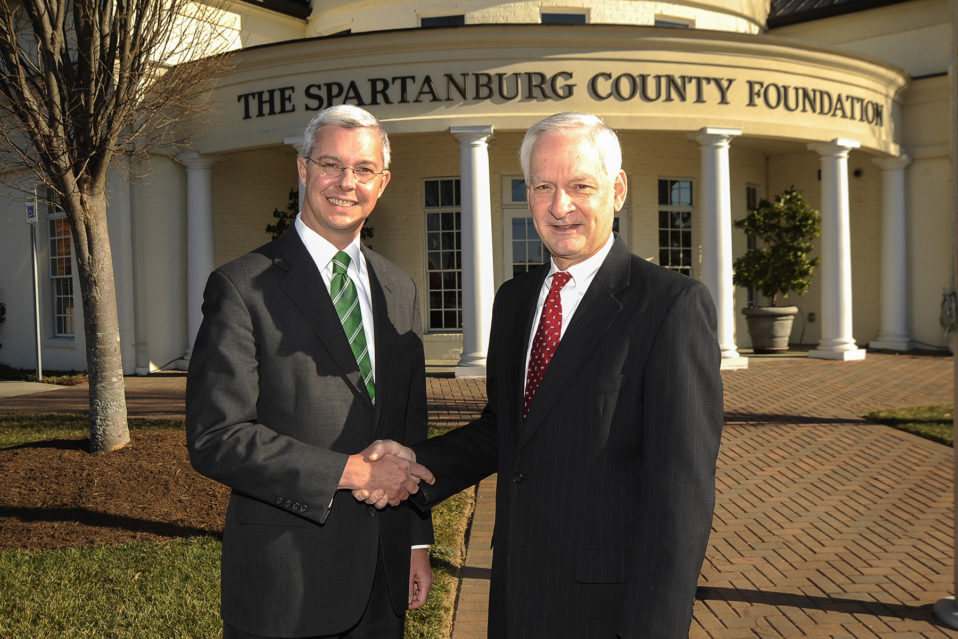 “I am excited to formally announce Troy Hanna as the next president and chief executive officer of The Spartanburg County Foundation.   Troy’s exceptional leadership capabilities, his experience and expertise in donor relations and wealth management, and his ability to relate to the Spartanburg community make him an ideal fit to lead this organization into its next era,” stated Rob Gregory, chairman of the Board of Trustees.  Chairman Gregory announced the selection during a meeting on Wednesday morning at the Foundation offices.

A search committee, which consisted of current and former members of the Board of Trustees, began looking for Dargan’s replacement last September after he announced his retirement plans.  The search was conducted at the national level, with a regional focus.  The Foundation’s search committee was assisted by Sockwell Partners, a Charlotte-based executive search firm.

Dr. John Stockwell, chairman of the Foundation’s search committee, commented, “We had a great field of candidates, and our decision came down to the candidate whose leadership and experience is the best fit for The Spartanburg County Foundation.  We are confident Mr. Hanna’s experience, in addition to his strong commitment to the Spartanburg community, will make for the successful transition that is needed to ensure future growth of the Foundation.”

Hanna is currently vice president and private client relationship manager for TD Wealth.  He is responsible for managing all aspects of client development for both new and existing individual and institutional clients.  Hanna leads a team of specialists in providing comprehensive wealth solutions and professional asset management to individuals, corporations, non-profit organizations, endowments, municipalities, foundations and pensions.  Prior to working for TD Bank, Hanna was vice president and private banking relationship manager for Wachovia Bank from 1994 until 2006.

Hanna is currently serving on several boards of directors, including: Pine Street School Foundation, SAFE Homes-Rape Crisis Coalition, The Arts Partnership of Greater Spartanburg and University of South Carolina Upstate Foundation.  He has served in leadership roles with Hatcher Garden and Woodland Preserve, Spartanburg Art Museum, Spartanburg County Historical Association and The Music Foundation of Spartanburg.  Hanna was awarded United Way of the Piedmont’s Walter S. Montgomery Award for Young Leadership in 2009, and was a member of the Leadership Spartanburg Class of 1999.

“I am extremely excited about the opportunity to serve the community in this capacity, and I am especially excited to work with the staff and board of Trustees of The Spartanburg County Foundation to continue building the momentum of the initiatives that are currently underway in Spartanburg,” Hanna stated.  “I am strongly committed to this community; my wife, Cecilia, and I have chosen to raise our children here, and I have a vested interest in the success of Spartanburg County.  I am thankful for this opportunity to impact the future of our community, and I look forward to serving as president and CEO of The Spartanburg County Foundation.”

Hanna, a native of Columbia, South Carolina, resides in Spartanburg.  He and his wife, Cecilia, have two children, Lillian and Mac.

Your ticket for the: HANNA CHOSEN TO LEAD SPARTANBURG COUNTY FOUNDATION