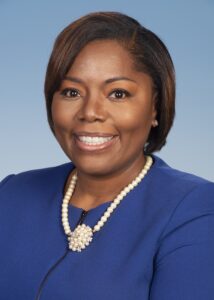 The Spartanburg County Foundation is pleased to announce the election of Erika L. McJimpsey to the Board of Trustees for a term of seven years.

In 1996, she was hired as the first African-American female prosecutor for the Seventh Judicial Circuit and worked as the circuit’s first full-time domestic violence prosecutor, as well as, previously serving as an attorney for the South Carolina Department of Juvenile Justice.

Erika L. McJimpsey received her Bachelor of Science degree in Journalism from Middle Tennessee State University and her Juris Doctor Degree from North Carolina Central School of Law. Erika was commissioned as a 1st Lieutenant and served our country as a Judge Advocate General in the U.S. Army Reserves.  She has received numerous awards including the 2004 Ernest Fritz Hollings Award for Excellence in State Prosecution (Family Court), as well as being recognized by the Mary L. Thomas Award for Civic Leadership and Community Change for Faith. She is also a member of Delta Sigma Theta Sorority, Inc.

Erika speaks on a regular basis to schools in Spartanburg County about the judicial system and the importance of connecting your purpose with your passion.  She and her husband, Ryan, are the founders and senior leaders of City Gate Ministries.  She is a proud wife and mother of three sons.

Your ticket for the: The Foundation Welcomes Erika McJimpsey as New Trustee