First renderings of Center for Philanthropy presented to Design Review Board 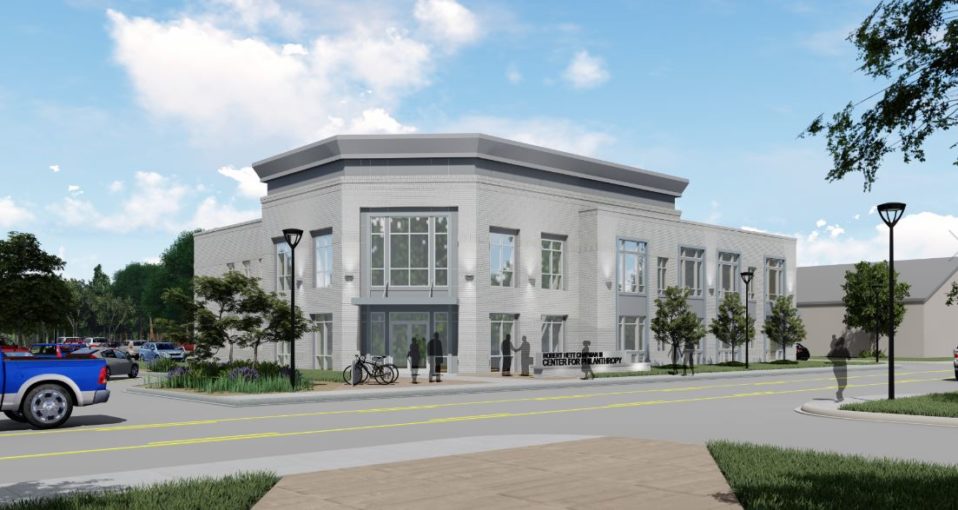 **Article Correction: Please note that the total budget for building the Center for Philanthropy is $4 million.  The $4 million challenge grant generously given by Jerry Richardson is to establish a permanent endowment fund that will be used for the building’s operations once the structure is open.

By Samantha Swann, Staff Writer for the Spartanburg Herald-Journal

The first plans for the $8 million Robert Hett Chapman III Center for Philanthropy were presented to the Spartanburg Design Review Board Monday night.

The center will provide additional space for The Spartanburg County Foundation, adjacent to the foundation’s headquarters at 431 E. Kennedy St., the former site of Hardee’s No. 1. The property was donated to the foundation in 2017 by Susu and George Dean Johnson, and the new Center for Philanthropy was announced during the foundation’s 75th-anniversary bash in November 2018.

Adam Flynn of McMillan Pazdan Smith presented the designs. Flynn said their goal is to have the Center for Philanthropy and foundation’s headquarters complement each other aesthetically. Renderings of the center show a traditional looking design in white brick with a few contemporary nods. The design is very angular and features a stucco cornice and steel trim around the windows and entrances. Flynn noted that the building will have a corner entrance aligned to face the foundation’s building across the street to visually connect the two.

The board, represented Monday night by Ricky Richardson, Kevin James Demark and Mike Henthorn, were in favor of the designs overall. Richardson did express concerns about the set back of the building, and how it would affect the look of the streetscape as Kennedy Street continues to develop. Current designs show the entrance of the building is about 14-16 feet from the street to allow for a plaza.

“I’m not thinking about this property specifically as I am thinking about the entire continuum of Kennedy Street,” Richardson said. “This building’s going to be here a long time and I think the placement of it could be important. We have so much on that street that’s not going to come up to the street.”

Mike Henthorn was quick to point out that placing the building too close to the street could also potentially cause problems if the street were to be widened.

The foundation also requested an exception be made for them to add a monument-style sign for the building. Flynn noted that only building mounted signage was allowed in the area.

“We know it’s technically not in the letter of the code, but in honoring a great citizen of the city, we feel that it would be appropriate to have his name featured,” Flynn said.

The design review board said they would be considering both the building set back and the sign going forward. Since the presentation was for review and commentary only, no vote was taken.

Your ticket for the: First renderings of Center for Philanthropy presented to Design Review Board

First renderings of Center for Philanthropy presented to Design Review Board