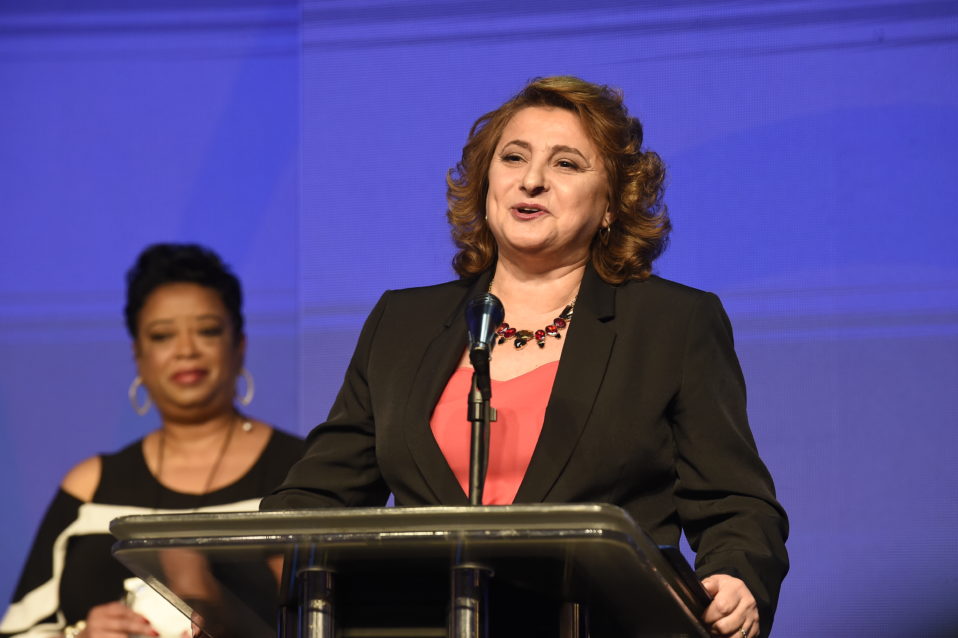 The Spartanburg County Foundation announced Loreta Dylgjeri as the 2019 recipient of the Mary L. Thomas Award for Civic Leadership and Community Change at its Annual Meeting Tuesday, March 26, 2019, at the Spartanburg Marriott.  Over 400 of the Foundation’s donors and volunteers, nonprofit leaders, and community leaders were in attendance.

Dylgjeri received the award, because she has utilized her skills to spark positive action in the lives of others.  Loreta has connected people to causes throughout the community and has developed signature fundraisers for HALTER, South Carolina School for the Deaf and Blind, and Sidewalk Hope.  She goes above and beyond her volunteer roles by investing her time behind the scenes with many nonprofit leaders, offering advice, governance support, and resources to help keep their focus on the organization’s mission.

“It’s a trickle-down effect that most people wouldn’t see.  The things that Loreta has done for us have allowed me to keep my focus on our children,” says Chip Walters, Executive Director of Sidewalk Hope.  “Loreta has a big heart for children; all children, but especially children who have challenges.”

Dylgjeri was embraced by many in Spartanburg when she moved here from war-torn Albania nearly 25 years ago.  Loreta has extensively studied education from several universities, and she was the principal of a school for disabled children in Albania before coming to the United States.

“She understands that people with disabilities can still lead purposeful, productive lives, and that is where her passion lies,” says Cyndi Beacham,

Loreta is the current Board Chair of the Charles Lea Center Foundation and has served on the board for several years.  Her leadership has advanced not only the Foundation, but also the people served by the Charles Lea Center.  Dylgjeri also serves on the boards of several other nonprofits throughout Spartanburg, giving selflessly of her time and talent to raise money, awareness, and provide overall support where she has identified a need.

The Mary L. Thomas Award for Civic Leadership and Community Change is an annual award that honors individuals who work tirelessly behind the scenes to provide valuable public service to improve the quality of life in Spartanburg County.  By receiving the award, Dylgjeri was honored with a $5,000 grant, which she chose to give to five different organizations: Charles Lea Center Foundation, SCSDB Foundation, Hope Center for Children, HALTER, and Sidewalk Hope.

The Mary L. Thomas Award was established in 2006, after Mary Thomas, chief operating officer of The Spartanburg County Foundation, was recognized as recipient of the prestigious Robert W. Scrivner Award for Creative Grantmaking.  Upon receiving the Scrivner Award, Thomas sought to start a similar recognition program in Spartanburg.  Thomas’ prize money coupled with the support of the Spartanburg community enabled the Foundation to permanently endow the Mary L. Thomas Award Fund.  Thomas is known for leading the Foundation into a period of innovation and grassroots leadership.  The award honors individuals who, like Mary, are community leaders, innovators and contributors to community change.

Your ticket for the: Loreta Dylgjeri Named 2019 Recipient of the Mary L. Thomas Award for Civic Leadership and Community Change